Zeljka and Bruce Join the Mazda Family in a Mazda 3 Sport! Zeljka and Bruce drove out from Vancouver to pick up their all new 2017 Mazda 3 Sport! After communicating with Raymon over email, they chose to purchase at West Coast Mazda based on our great pricing and the high level of service offered. Congratulations to you both from Raymon and the rest of the West Coast Mazda team. Zoom Zoom!

Diane’s Happy Going From One MX-5 to the Next! Diane is taking delivery of her 2016 Mazda MX-5 from Sales Associate Raymon Hothi.  She is upgrading from her 2009 MX-5 and came to us from Vancouver for a painless buying experience. Congratulations Diane, Zoom Zoom! 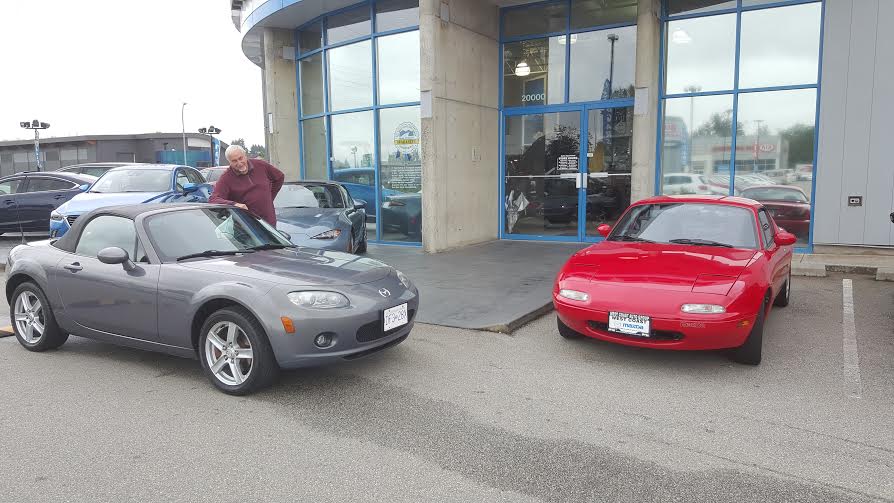 A big congratulations to Fred from Raymon Hothi and the rest of the West Coast Mazda on the purchase of his 2006 Mazda Miata! Not everyday we see a collector plated vehicle traded in but for Fred it was time to swap a manual transmission for an automatic.  Fred looks sharp leaning on his new Miata with perhaps his next purchase lurking behind him!

The Perfect Wheels for Every Grandma! Barb is trading in her pride and joy 2006 Ford Mustang for our 2012 Jeep Patriot as she is moving to Williams Lake to be closer to her children and grandchildren.  She had heard great things about West Coast Mazda from a friend who purchased at one of our partner stores. Karen Yang is the proud owner of her new 2016 Mazda MX-5 GT thanks to the help from Sales Consultant, Raymon Hothi. Local resident to West Coast Mazda, she has purchased here previously and was excited to get into something new. Congratulations Karen on your new MX-5!